The jack hammer is a handy tool used to break large portions of concrete or rock into smaller chunks that can easily be handled. It has a piston mechanism that drives a chisel by forward and backward movements within a cylinder thereby providing the breaking force required. There are many types of jack hammers namely: 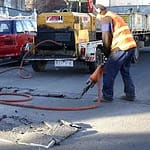 This type of jack hammer uses compressed air as the driving force of operation. The compressed air is normally produced by a diesel powered air compressor and delivered via high pressure hoses to the pneumatic jack hammer. They are normally used where great breaking force is required like in quarries and demolition of high strength concrete structures.

These types of hammers use incompressible hydaulic fluids to drive the piston mechanism. they are normally machine mounted and are used in mining and other major demolition works. Unlike the pneumatic and electromechanical jack hammers that can only be used vertically downwards, hydraulic hammers can be used both horizontally and vertically upwards.

Electromechanical hammers can be put to a variety of demolition and mining uses though it is one of the main equipments required for strip out demolition methodology.

In this video, an electromechanical jack hammer is being used to break rock deposits that were hindering adequate settlement of Septic tank concrete walls. The septic tank was constructed in shale deposits during rainy season making it impossible to shore up excavated walls, hence the wall settlement method was used to achieve adequate wall formation.

Engr. Okoye is a registered Civil engineer with interests in Engineering, Project and construction management as well as general management. He is currently the Managing Director of Conifer Konstruktion (Nig) Ltd, a Building construction/project management company located in Awka, South Eastern Nigeria.